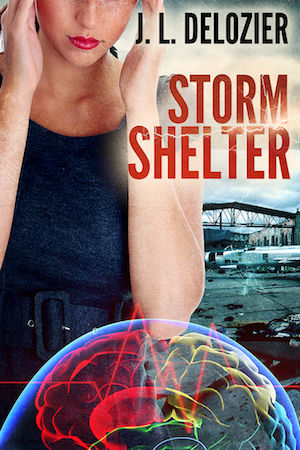 Jen Delozier, a Debut Author at Thrillerfest this year with her novel Type & Cross, which finaled in the Best First Novel category of the Thriller Awards and is currently free on Kindle.

Clearly Delozier is no slacker: she has already published the next book in the same series, STORM SHELTER, with WiDo Publishing.

STORM SHELTER  is actually a prequel to Type & Cross. It's Dr. Persephone Smith's "creation story." In this novel she's a psychologist who has a regular practice but also deploys to areas hit by disasters like earthquakes and hurricanes. The storm shelter of the title is a hurricane shelter that holds hundreds of people.

The book occupies itself with just a handful, or, more precisely, two handfuls: a handful of the staff and a handful of the refugees from the storm. For most of the story the storm is so bad that everyone is locked in, and all communication lines are down. From there the story goes to an And Then There Were None type of plot, with one person after another getting killed. And only Seph has the right combination of skills and empathetic gift to solve the mystery. Seph must become both counselor and detective to determine who, or what, is calling them prey. Is the panic and mayhem just “shelter shock,” as the lead physician, Anne Parrish, insists? Or is everyone, Seph included, in danger of losing their minds—and their lives?

By the end of the book Dr. Smith decides to leave private practice behind and become a forensic psychologist, setting her up for Type & Cross.

Here is an excerpt from STORM SHELTER:

“I know what you want me to say.” Delmas deepened his voice, accentuating his slow, Southern drawl. “But I don’t know who your murderer is or what kind of game he’s playing. For all I know, there could be more than one.” He circled her body with his own, his breath in her ear, then her hair, then back to her cheek.
“Something is spreading, like a disease. Maybe it started with Selma’s murder, or maybe it started with the storm itself. I knew we were in trouble the minute the queen closed and locked the shelter doors. Can’t you feel it building? That off-kilter feeling, like you’re in a fun house at the country fair?” 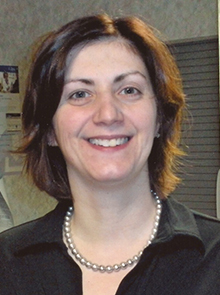 Dr. Jennifer Delozier submitted her first story, handwritten in pencil on lined school paper, to Isaac Asimov's magazine while still in junior high school. Several years later, she took a creative writing elective at Penn State University and was hooked. She received her BS and MD degrees in six years, which was followed by the blur of internship, residency, and the launch of her medical career. But she never forgot her first love. When she sat down to write her debut thriller, she spent some time rediscovering her favorite physician writers. From the deductive reasoning of Sir Arthur Conan Doyle to the cutting edge science of Michael Crichton, she remains inspired by facts that lie on the edge of reality: bizarre medical anomalies, new genetic discoveries and so on. These form the backbone of Type & Cross.

Dr. Delozier spent the early part of her career as a rural family doctor and then later as a government physician, caring for America’s veterans. She continues to practice medicine and lives in Pennsylvania with her husband and four rescue cats.

You can reach Jen through social media: