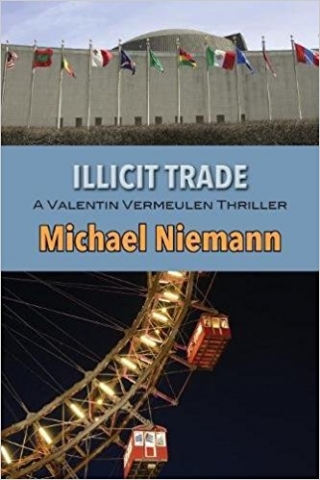 And Michael Niemann has Valentin Vermuelen.

Vermeulen first made his appearance in the short story “Africa always needs Guns,” published in the Mystery Writers of America Anthology Vengeance, edited by Lee Child (Mulholland Books, 2012). This story introduced readers to a man with a clear-cut sense of justice, a taste for kick-ass women (though he exhibits a chivalric concern for all women), and a propensity to get kicked out of jobs and marriages.

Vermeulen’s armor gets grittier in Niemann’s next two novels. The first was Legitimate Business, in which Vermeulen investigates the death of a United Nations peacekeeping constable, a death declared a random shooting by his superiors, but which he is sure is a murder.

In Illicit Trade, Nieman’s second Vermeulen novel, (Coffeetown Press, March 2017) two undocumented immigrants from Kenya are found dead in Newark and New York. Vermeulen’s superiors don’t care how they died. They want Vermeulen to track down the source of the forged UN letters that the men used to get into the US. Vermeulen finds that the two men are just the tip of a large smuggling ring that gives a new meaning to the term human trafficking.

Niemann gives his readers a powerful contrast. His hero is Belgian (Flemish) with his shock of blond hair (an errant strand always in his eyes), who investigates fraud for the United Nations Office of Internal Oversight Services (yes, that’s a real thing).

Then there are the settings. Multiple settings, but all of the kinds of places where UN peacekeepers have a strong presence. So far the main action all happens in Africa, from the East Congo in “Africa Always Needs Guns,” to Darfur in the Sudan in Legitimate Business, to Nairobi, Kenya, in Illicit Trade. For those who aren’t sure where these places are, Niemann puts maps and images of the settings that inspired him on the book’s webpages. Darfur and  Kenya.

Vermeulen might start out in Darfur or Kibera, (the slums outside of Nairobi,) but he climbs the puppet-strings of responsibility until he finds the real sources of criminal control in places like Brussels, Vienna, and New Jersey. (With a bit of tongue-in-cheek humor, Niemann provides maps of those places on his web page as well.)

Vermeulen is often helped in his search by the already-mentioned kick-ass women, whether it is an intrepid journalist, a UN peacekeeper, or his own daughter.

In Illicit Trade a new supporting character makes an appearance, a small-time con artist from Newark named Jackson, who becomes Vermeulen’s investigative doppelganger. I was glad that in spite of his ability to find trouble, Jackson lives to see another day. And hopefully, we will see him again in another Niemann novel.

Niemann’s theme is hopeful and nihilistic at the same time. On the one hand, Vermeulen pursues justice for the people he encounters without considering the risks to himself. On the other hand the power of the evildoers he is up against, the corruption of those who should be backing him, and what Niemann calls ‘the fuzzy lines of authority,’ makes bringing about real change seemingly impossible.

You don’t need to read the short story and the books in order, like I did,  to get the most out of Illicit Trade, but it would be a shame to deprive yourself of the experience. 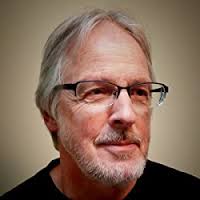 Michael Niemann grew up in a small town in Germany, ten kilometers from the Dutch border. Crossing that border often at a young age sparked in him a curiosity about the larger world. He studied political science at the Rheinische Friedrich-Wilhelms Universität in Bonn and international studies at the University of Denver. During his academic career he focused his work on southern Africa and frequently spent time in the region. After taking a fiction writing course from his friend, the late Fred Pfeil, he switched to mysteries as a different way to write about the world. Twitter  Facebook

Bonus: Article by Michael Sears in The Big Thrill