Learn the tricks of Suspense from Elaine Viets and win a copy of her latest Angela Richman Mystery! 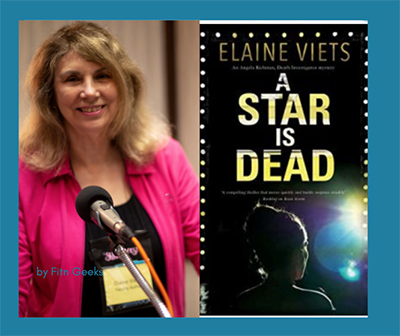 Veteran best-selling author Elaine Viets is a mystery writer based in South Florida. The fourth installment of one of my favorite noir/hardboiled detectives, the Angela Richman Death investigator series, A Star is Dead, has just been published.

“Ageless” Hollywood diva Jessica Gray is finishing the last leg of her one-woman show in St Louis, Missouri, and the nearby town of Chouteau Forest is dazzled. During the show she humiliates three homeless women onstage, fires her entourage – not for the first time – and makes a bitter enemy of the town’s powerful patriarch.

After she collapses at an after-show party and is rushed to the hospital, she ignores the advice of her doctors and discharges herself in order to return to LA. On the way to the airport she suffers a deadly coughing fit. It was poison. When Angela Richman’s friend, Mario, is arrested for the murder and faces the death penalty, she is compelled to investigate.

With so many grudges held against the actress and Mario’s life on the line, the stakes are higher than ever.

We first met Angela Richman in Brainstorm, where Angela suffers trials that earn her a place next to Job. Before the series begins, her beloved husband dies. She still hasn’t recovered from his death when she herself suffers a series of strokes.

Angela goes to see Dr. Gravois,  the doctor-to-the-rich of Chouteou Forest, a tony enclave outside of St. Louis. But the good (or not so good) doctor pooh-poohs her symptoms and sends her home.  Angela is saved from death or an even worse fate by Doctor Tritt, a boorish but talented surgeon. Gravois ends up murdered, Tritt ends up a suspect, and only Angela cares enough about him to find his murderer.

You can read my review of Brainstorm and its sequel, Fire and Ashes, here.

Fire and Ashes was followed by the novella, Ice Blonde, a compact and wonderful story about an elite teenager who goes missing in the freezing cold right after a party:

Elaine has written several other series. Her Shop Until You Drop Series, is now digital! And her mysteries about journalist Francesca Vierling are now getting re-released by Jabberwocky Literary.

You can meet and learn from Elaine at this class on Tricks for Writing Suspense on April 26, 2020, at 7 pm. One lucky winner will get free copies of her latest Angela Richman book!

Here are the details on the class:

In honor of the publication of The Beat of Black Wings: Crime Fiction Inspired by the Songs of Joni Mitchell, and the publication of A Star is Dead by Elaine Viets and I know Where You Sleep by Alan Orloff, we bring you a zoom session on How to Generate Suspense in your Fiction Writing. Don’t miss this hour packed with tips, tools, and information! Sponsored by Murder on the Beach Mystery Bookstore, who will be shipping specially-priced bundles of the books by these authors to one contest winners! Books can also be purchased at a reduced price from Murder on the Beach.

Details of the course:

THE STAKES: If you’ve ever taken writing workshop or exchanged pages with a critique partner, you may have heard the advice, “Raise the stakes.” Much of the time, it’s valid—who wants to read a dull story where it really doesn’t matter if the protagonist succeeds? Here are a few tips for raising the stakes for your hero!

THE DRIVING QUESTIONS: Lee Child famously said that readers are programmed to wait for answers to questions they witness being asked. Child instructs writers to plant questions in stories that the reader needs to have answered, so they keep reading. We will look at how this works in well-known works.