A MYSTERY FOR EVERY MOOD

Regular readers of this blog already know that I’m a huge fan of Elaine Viets’ Death Investigator series, starring the intrepid Angela Richman. You can read about that series here. Now Viets comes back with her light and humorous, bestselling and now classic, Dead End Job Series.

Viets researched  these books herself by taking the same sort of low-level dead-end jobs—telemarketer, shop clerk, dog groomer, wedding dress saleslady, and so forth—as those held by the series' protagonist, Helen Hawthorne. 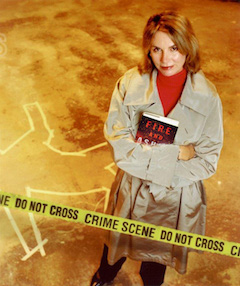 Until now this classic series was only available in printed form. I love the covers on the hardbacks great for reading in bed or in the easy chair. But what about the doctor’s office, the long line at the checkout, or on the long airplane flight? It’s nicer to be able to pull up one book after another on the phone or the iPad.

Well, now we can. The first thirteen books in the  Dead-End Job mysteries have been re-released by JABberwocky Literary on March 6 as e-books, with new covers by the award-winning Jenn Reese at Tiger Bright Studios. (Among other marvelous reads, JABberwocky also publishes Charlaine Harris' Aurora Teagarden backlist).

Helen Hawthorne didn't start as the kind of person who needed a dead-end job. At first she lives in St. Louis and has a job in high-finance, beautiful home— and a good-for-nothing husband she catches in the act with their neighbor. When she divorced the bum, the judge saddles Helen with alimony. Helen refuses to pay her ex, tosses her wedding ring in the Mississippi River and goes on the run.

She wind up in Fort Lauderdale, natch, working dead-end jobs for cash under the table. Follow Helen as she learns to thrive in subtropical South Florida. She forms a new family at the Coronado Tropic Apartmerns, with Margery, her landlady who always wears purple, Peggy and her parrot Pete, and other colorful characters.

In these thirteen novels, Helen changes. She goes from a bitter woman who distrusts men to a happily married bride. She becomes a private eye. She still works those low-paying jobs, but now she's undercover.

Though now billed as classics, Helen's in-depth exploration of the pink-collar world has become timelier since the series started.

Now you can read the first 13 Dead-End Job mysteries as e-books:

Get the whole set or treat yourself to the books you missed. Prices start at $2.99 and go up. Check them out here.

Remember, there are no calories in binge reads!

WHAT THE CRITICS SAY

Elaine Viets has written 32 mysteries in four series: the bestselling Dead-End Job series with South Florida PI Helen Hawthorne, the cozy Josie Marcus Mystery Shopper mysteries, and the dark Francesca Vierling mysteries. With the Angela Richman Death Investigator series, Elaine returns to her hardboiled roots and uses her experience as a stroke survivor and her studies at the Medicolegal Death Investigators Training Course. Elaine was a director at large for the Mystery Writers of America. She's a frequent contributor to Alfred Hitchcock's Mystery Magazine and anthologies edited by Charlaine Harris and Lawrence Block. Elaine won the Anthony, Agatha and Lefty Awards.